Finalists: a Challenge in Shanghai for MBA Students

They were the only European group to compete in the final : five MBA students flew to Shanghai to pitch in front of Pernod Ricard’s China subsidiary, as part of the Ask Jerry Challenge.

The contestants in the challenge launched by Pernod Ricard China presented a project which aim was to develop the Ask Jerry Chatbot, created by the brand on the most popular Chinese social network, WeChat. The goal was to have consumers see Ask Jerry as a major platform in the world of cocktails and to make it a reference for professionals.

Selected among more than 120 teams

Lev Mukhin, Yatin Anand, Anna Pakandlová, Meriem Bouzidi and Paras Khushiramani, students in the MBA, are members of the group selected for the challenge final, along nine other teams. They were the only European group to compete against the Asian team in Shanghai on December 12th for the challenge’s grand final : a five-minute speech in front of the Pernod Ricard China team, followed by five minutes of questions and answers. 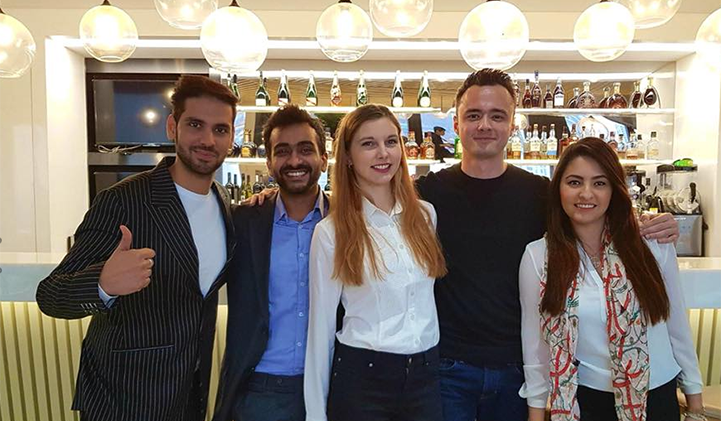 Back in October, the five students submitted a first five-slide presentation describing the outline of their project for Ask Jerry. The online votes took them through the second step of the challenge : the “collaboration phase” with nine other teams: they got support from a Pernod Ricard China business mentor to elaborate on their project and make it a real business plan for the chatbot’s growth, including a business model and a three-year roadmap.

Next step was defending their project and convincing Pernod Ricard’s executive managers. Winners were rewarded with a three-month internship in the Shanghai offices of the brand, to launch their project.

Immersed in Chinese culture for a few days

The MBA students participated in the Ask Jerry challenge as part of a class taught by Patricia Baudier, head of the Digital Marketing Strategy major at EMLV. These challenge sessions are a great occasion to test the concepts, tools and methodologies taught in class, with professional conditions. Pernod Ricard, a major player in the wine and spirits sector knows how strategic the Chinese market is for the brand world growth.

“We spent the first day preparing for the presentation. The next day we went to the head office of Pernod Ricard China. Representatives of the company welcomed us warmly. We met the other teams, almost all of them from Shanghai. We presented our project, in my opinion, perfectly. Our slogan was: Innovation and International Best Practices” says contestant Lev Muhkin.

In spite of the fact that the EMLV team did not win, students were satisfied with their experiences. They seized the opportunity to be in Shanghai to do some sightseeing: The Bund, Shanghai World Financial Center, Yu Garden, People’s Square…and to taste local specialties.

The Ask Jerry challenge fitted perfectly in the Digital Marketing Strategy MBA course. The contestants used online platform Ask Jerry to develop the local consumers’ knowledge about cocktails: their history and uses especially, by offering tailor-made and high added value content. Students also targeted the barmen and bar owners in their project: Pernod Ricard wants Ask Jerry to become a community for cocktail professionals. The platform is aimed to be a means of communications for them and a place to share their habits and promote their activities.

Read more about the MBA