EMLV is ranked third among the 14 post-baccalaureate business schools and gains one place in the global ranking list of the 38 schools awarding a Master’s degree, reaching 19th place.

Lefigaro’s ranking places great emphasis on the corporate relations that the school fosters with its partners. That’s an excellent opportunity for its graduates, who are “hired by top banks and consulting firms such as BNP Paribas, Société Générale, BPCE, Ernst & Young and Deloitte,” said Lefigaro.

For this year’s edition, the EMLV is ranked third in the post-bac ranking, with a score of 15.1 out of 20.

Corporate relations, a jackpot for EMLV

After graduating from a top business school, many young grads dream of finding a job in a Big Four company. It’s a dream that often comes true for many EMLV graduates. This is made possible by the school’s partnerships with large accounting firms and many attractive companies for young people, such as those ranked at the top of Universum rankings.

To better meet the expectations of its partner companies, EMLV regularly involves them in its pedagogical programs through the development committees organized each year.

EMLV corporate partners can communicate their internship, work-study, and job offers directly to students’ e-mail addresses and via the Pole Leonard de Vinci virtual campus. In addition, they can promote their employer brand by hosting lectures and conferences with experts in the field.

Various recruitment events such as the Career Fair, the work-study forum and the alumni forum allow students to engage with companies, whatever the specialization they choose for their Master’s degree.

This 2022 ranking is available online on Le Figaro’s website (french). 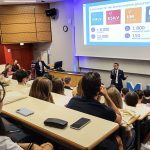 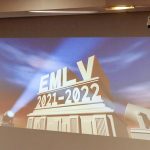 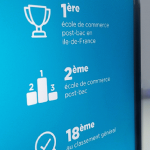 All Rankings at One Place: France Meta Business Schools Ranking

May 25, 2021
Discover
our programmes Start
your application