More than 1,000 students formed 170 cross-curricular inter-school project teams to address the risks of digital hyperconnectivity and data hyper-transparency during a hackathon week at the Pole Leonard de Vinci. These were the ingredients that formed the recipe of the latest Soft Skills Pedagogical Week which took place from 17 – 21 February 2020 at the Pole Léonard de Vinci.

The hackathon, which took place under the theme “What alternatives are available to limit the risks of hyperconnectivity and data hyper transparency?” brought together 1,100 4th-year students from the three schools of the Pole Leonardo de Vinci: EMLV, ESILV, and IIM.

The significance of the ? button. A  standardization project of online social influence rating systems 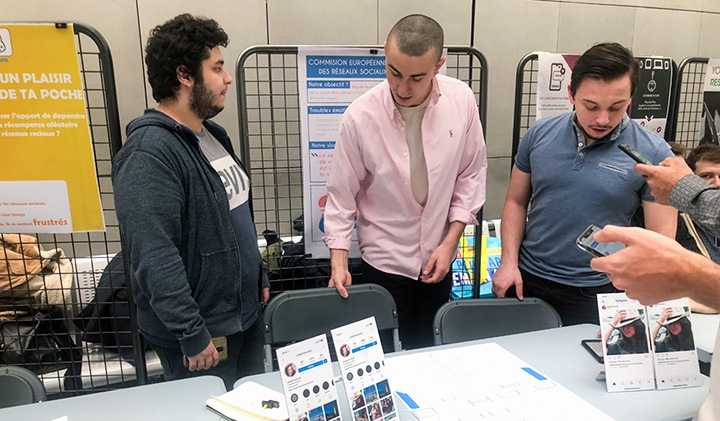 “80% of young people use social networks. In addition, 50% of the young people have already experienced mental disorders; 40% of the girls have already been victims of harassment on the networks. How to respond to these problems? There are two solutions. “Standardizing” the social popularity metrics by limitting visibility of likes, subscriptions, retweets. Let’s say I have 120,000 subscribers on my Instagram account. If we “standardize” the metrics, we will only be able to see 1k + subscribers on my account. This change would “abolish” the popularity metrics system, which has a very negative impact consequences on the young people’s mental health. They would stop comparying themselves to others. Our second solution : enabling the authors of the posts  to authorise comments on their Instagram publications. “(Gabriel Maître, IIM) 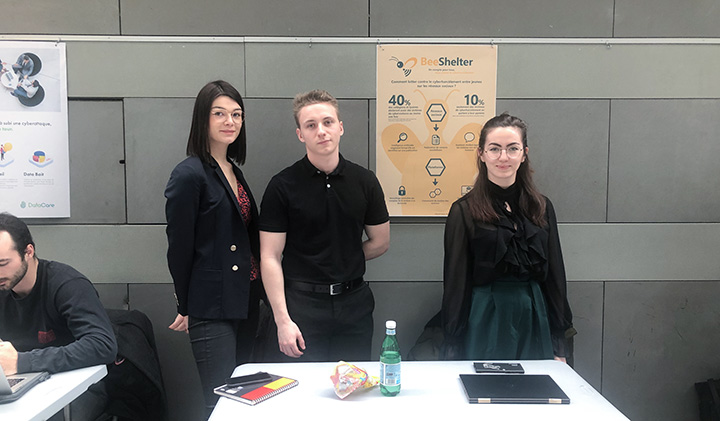 “We imagined a support platform, called BeeShelter, with 3 functionalities. First, we propose  a social media account, which can be tagged on offensive, rude, and insulting social media publications, as a mean to report the cyber-bullying tentatives. This account will rely on artificial intelligence to analyse the content and push the victims toward a support chatbot. Secondly, we propose a web and mobile platform that can block all bullying accounts on social media. AI processes and records evidence to file complaints. Thirdly, we start a support group for cyberbullied teens. ”  (Maxime Dupêcher, IIM)

This year’s Soft Skills Week’s challenge proposed to the students was to refine their problems and find solutions through rigorous methods.

The aim of the Leonardo da Vinci Cluster’s transversal weeks is to bring students from the three schools, EMLV, ESILV, and IIM, to meet and study together, in order to decompartmentalize their approaches and open up their horizons.

To learn more about the transversal approach at EMLV, click here. 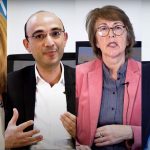 According to a Survey led by EMLV, Gen-Z wants no more than Occasional Telework