Leonardo da Vinci was born on April 15, 1452, in a farm village in Tuscany. As a young boy he received no particular education but showed a keen interest in arts and in the utilisation of diverse materials. Far from having noble origins, he was considered an “illegitimate” son, a term used for children born to unmarried parents that consigned him, at age 15, to the guardianship of Andrea del Verrocchio.

From his early beginnings and through his long career, Leonardo was able to work on a stunning range of public and private projects – from paintings, sculptures, sketches and frescos to military equipment. One of his last works was a mechanical lion that could open its chest to reveal a bouquet of fleur de lys, a symbol of the French monarchy.

Leonardo saw no limits to the use of his artistic competences in favour of his engineering ones and vice versa. As he was painting he remained a scientist, coming up with new colours, products and techniques, just as he was comfortable as an artist who produced engineering work – his sketches are proof of this. Indeed, Leonardo’s inventiveness in the art studio is in part responsible for the poor state of many of his works. The Last Supper, a 15th-century mural in the Convent of Santa Maria delle Grazie in Milan, Italy, was painted on dry rather than wet plaster, and was flaking just 20 years after it was completed.

The depth and breadth of Leonardo’s knowledge is everywhere – works on physics are informed with his understanding of anatomy and human psychology. Perhaps the most representative of this crossover of worlds is the The Vitruvian Man. It is based on the work of Roman architect Vitruvius, who based architectural proportions on the human form. It allowed Leonardo to transcend and join conceptions of mathematics, anatomy and design into one human figure, a unique visual bridge between the sciences.

Life-long learning through observation and experimentation 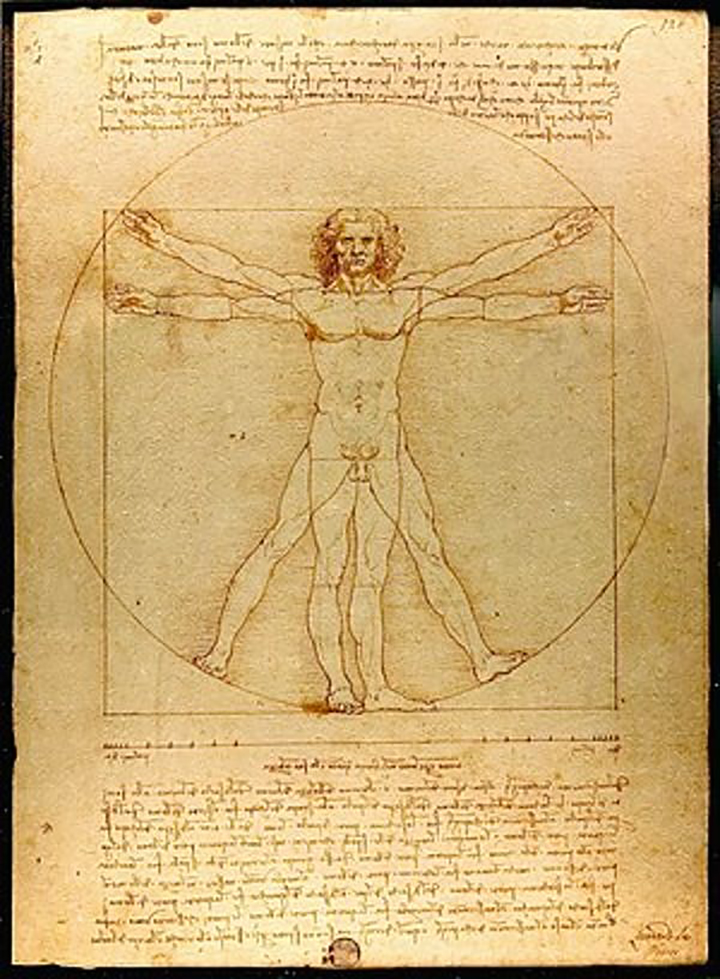 Leonardo da Vinci can also be understood as a continuous quest for learning, of life-long learning. He was a man addicted to knowledge and convinced of the need to build and develop complimentary capacities, competences and capabilities. But what is even more remarkable is that Leonardo was a self-learner, an autodidact. Through the power of observation, he was able to grasp the significance of complex phenomena and the relationships between variables.

An example are his contributions to geology. From simple observation he was one of the first scientists to recognize that fossils were in fact the imprinted remains of animals:

“… among one and another rock layer, there are the traces of the worms that crawled in them when they were not yet dry.”

The historic recollection of his contributions shows us that Leonardo was also capable of “selling” new projects. From the Medicis to the Sforzas, Da Vinci took on projects that went from the conception of military devices to the painting of the Last Supper, from architecture to bat-inspired flying machines.

In this sense Leonardo was capable of far more than just proposing innovative devices or magnificent works of art. He was also able to produce them in a project-management fashion: finding the necessary funding, establishing the different technical and human demand, and bringing the requested projects to life. In this sense, we can find that the “hardness” of Leonardo’s techniques were met by a “softness”, a parallel capacity to please his future clients through the presentation of new ideas.

Leonardo was even a successful event planner. On June 19, 1518, he planned the festivities to celebrate the wedding of Lorenzo di Pietro de Medici and Madeleine de La Tour d’Auvergne at Amboise. Of course, not even a genius is free from a potential disaster when preparing a big event such of a wedding. In a previous experience, when Ludovico Sforza asked him to create an edible 200-foot-long altar made of cake and polenta for his daughter’s wedding, da Vinci forgot to take one element into consideration: rats, which ate the majority of the altar the day before the wedding.

On the 500th anniversary of Leonardo’s passing, and in appreciation of his rich and varied contributions, the question becomes: How can our educational systems inspire the same imaginative qualities in students today?

One answer is to encourage interdisciplinarity – to train engineers to draw, architects to manage, managers to understand biology and biologists to explore the mechanics of a robot. There is much to be said in the life of someone who never stopped learning, and one of whose key competences was to learn by observing.

More about Faculty & Research at EMLV