The Business School Impact System Study: EMLV has a Positive Impact on its Environment

The EMLV was the subject of an in-depth study as part of the Business School Impact System EFMD-FNEGE Barometer. This index, developed by the National Foundation for the Teaching of Business Management and the European Foundation for Management Development, tracks a significative positive impact of the Pole Leonard de Vinci on the department of Hauts-de-Seine and region of Ile-de-France region.

This system, created by the National Foundation for the Teaching of Business Management, was successfully applied in various French business schools, both private and public.

Both EMLV and ESILV schools, located in a “department with an exceptional potential” are in close proximity to the businesses from Paris’s business district of La Défense.

“They make the most of their synergies and benefit from its pedagogical offer, whose main feature is its diversity, mixing managers, digital specialists and engineers”, the report states.

Beyond the purely financial impact of the Pole Leonard de Vinci, the report notes the social and educational roles of EMLV at the local level. The transversality between engineering and management students, as well as the keen interest in finance and digital technology, are helping the faculty in shaping employees who are sought after notably by local companies. 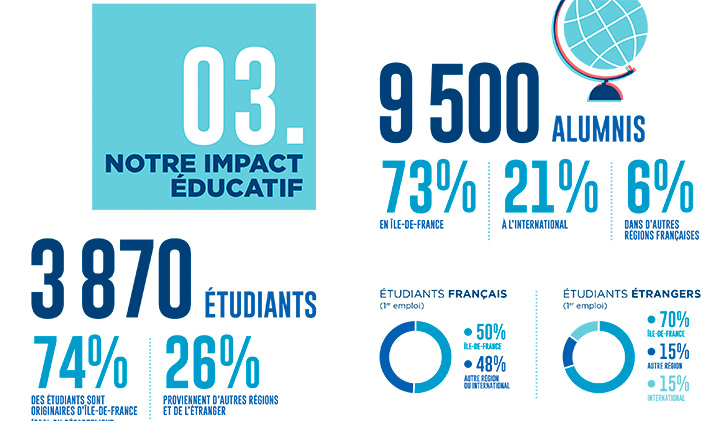 With nearly 9500 alumni students, 73% of whom work in Ile-de-France and 21% abroad, and almost 3900 students, the Pole has a sound educational impact in the region of Ile de France and abroad.

Student associations such as DeVinci FabLab, who initiates projects for student makers, are appreciated for their capacity to bring the local territory to life and to create new hybrid experiences. 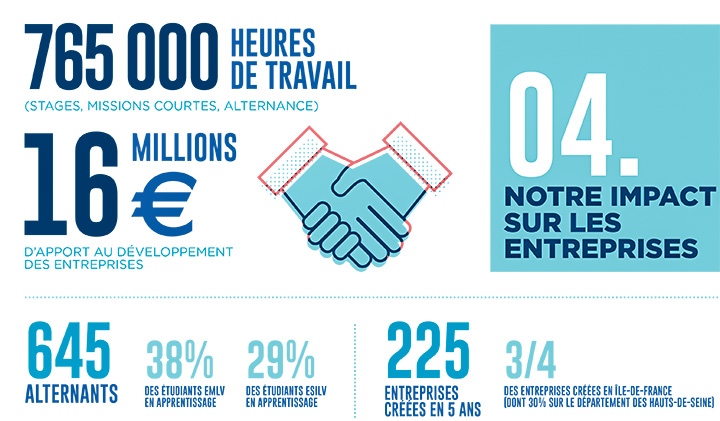 With nearly 765 000 working hours (internships, short assignments, work-study programs), 664 apprentices and more than 230 businesses created in five years, the influence of the Pole on the business ecosystem lies in its proximity to major companies from La Defense and in the entrepreneurial spirit of its students.

The positive intellectual impact takes into account more than 360 intellectual contributions of 76% of the faculty (PhD theses, articles, books, conferences, study cases) and the role of the joint EMLV and ESILV chairs.

Student associations (ADA, De Vinci Durable) make CSR contributions, such as solidarity and charity missions. The report also brings into the light the CSR focus in training, in research activities and the critical number of articles in CSR’s areas.

The EMLV and Pole Leonard de Vinci also have a positive influence on the region’s image in France and internationally. The study witnesses the international partnerships of the two schools and more than 1500 graduates each year, which represent a vast French talent pool for businesses in the area as well as for foreign companies. 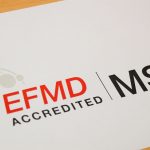 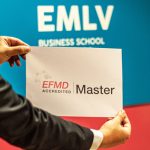 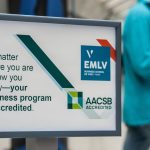