Thibault, Guillaume and Antoine created their startup back in 2012. Today, they are using the French crowdfunding platform “SmartAngels” to raise the necessary funds to expand their business.

M. Moustache creates and sells men’s shoes. If they initially targeted urban men in their thirties, the co-founders now want to broaden their range of products by selling women’s shoes. The shoe collections are sold in French Department stores (Galeries Lafayette, Le BHV Marais), online and in selected retailers abroad.

The 3 young entrepreneurs project a sales revenue of 1.4 million euros by the end of the year. The startup’s revenues have increased by 130% since its creation, is making profit and is currently employing 5 people.

Thibault, Antoine and Guillaume obtained their degree from EMLV School in 2011. They had specialized in corporate finance and communication and used their education and training to create their business.

Investors and business angels have been enthusiastic about M. Moustache :

Crowdfunding campaign to accelerate the business development in France and worldwide

The entrepreneurs have great ambitions for their startup. They need 400.000 euros to finance their growth. They want to increase their sales revenues to 10 million euros by 2020.

The funds will be used hence : 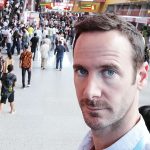 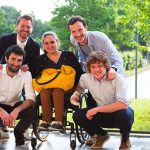